Tanjung Puting National Park, Love all of your Orangutans

Feeling tired after a long trip from Palangkaraya, Sampit, up to Pangkalan Bun did not make us lose our spirit to go to Tanjung Puting National Park. Great curiosity towards Orangutan in the national park has defeated our fatigue. After all of our jobs completed in Pangkalan Bun, we immediately headed the port in Kumai. We plan to visit three locations: Tanjung Harapan, the second camp is Pondok Tanggui, the Third Camp is Camp Leakey. But we miss a location, Tanjung Harapan. We miss Orang Utan feeding time at 3 o’clock. It because our job did not complete yet. Although our tour guide had called us have been many times but because we have not finished the job. Based on information collected from the Internet, total area of Tanjung Puting National Park is 415,040 ha consisting of Tanjung Puting Wildlife Reserve area of 300,040 ha, covering an area of 90,000 ha of production forests (ex HPH PT Hesubazah), and water area of 25,000 ha.

There are various flora and fauna that inhabit the national park. There are some plants and trees that live there. In addition, as many as 38 species of mammals; Borneo Orang Utan, Proboscis Monkey, Borneo Owa, and etc., some reptiles, and more than 200 species of birds live in Tanjung Puting National Park.

We started out almost in the middle of the day, having met with our guide named Nia. We go directly to wooden boats called Kelotok. My friends and I, four people, accompanied by one person boat driver and his assistant, a tour guide and a cook on board. We would do the tour two days and one night.

After a few minutes, we arrived at the monument orangutan as the entrance to the National Park area. From the monument, we began to enter the area of the river till later to some of our destination. During the trip, we found many interesting things that we’ve never met before. We sew a variety of plants and trees that are familiar or not. There are some plants that are familiar to me. That’s because some of the plants and the trees in Sumatera, my hometown.

We also met and saw some of the proboscis monkeys that were enjoying activities over the tall trees. Occasionally, we also met with proboscis monkeys on the branch low enough. It is certainly easier for us to take pictures. Also, several kinds of birds we saw was busy foraging in the woods or just fly from one tree to another. Earlier, when we were at the monument entrance. We saw a white eagle gripping a snake on the water and took him to the forest area.

At dusk, we were still loyal to see the sunset among the trees. We listened to some explanations and stories from Mba Nia. She showed us the river border with colors that are commonly seen and rivers of Borneo typical black or dark colored. She also talked about alligators, tourists and local residents were missing, and a policeman lost in the forest police station. He also showed us the location of the police station. Quite horrified if we were imagining that there are dozens or even hundreds of crocodiles are on the river below our boat.

When the sun had completely set. The driver told us that we were would spend the night in Tanjung Harapan area near from Sekoyor village. Then he moored the boat on a riverbank. After dinner, then we decided to sleep. Previously, boat driver and his assistant prepare our beds and mosquito nets for us. This is because a lot of mosquitoes at night. The ambience is so quiet even though there are some Kelotok that also moored nearby our Kelotok. The next morning before breakfast, we took the time to walk in the area. We saw some people sleeping on Kelotok or existing cottage in the area. After that we continued our trip to Pondok Tangguy, we would saw orangutan feeding time.

In Pondok Tanggui we walked into the forest about 200-300 meters. There are already a lot of visitors, especially foreign tourists, waiting for the moment the orangutan eating. The rangers are already yelling to call the orangutan, they told that the food was ready.

Fruits are already placed a wooden table and some orangutan immediately approached these fruits. They started to eat, there are males and females are also some female carrying their child. After the food was almost exhausted and some orangutan was back again to the forest, we immediately returned to the Kelotok. We continued our trip to Camp Leakey.

After a few hours and had lunch. We arrive at Camp Leakey.  This camp is a place for orangutan research center and a rehabilitation center. We can saw wild orangutan, semi-wild orangutan, and orangutan feeding time. Be careful if you arrive at the entrance of the camp, there are some wild monkeys that steal food and belongings of visitors. Two oranges and coffee sachets were stolen by monkeys. Besides bread-owned foreign tourists were also stolen. It’s quite funny, so that our friend make a joke. She said that if the monkey wanted to drinking coffee and eating bread. We all laughed.

We then go to Camp Leakey area. We walked past the wooden bridge and the path to some buildings in the area of rehabilitation and the orangutan research. There is a building that can be entered by a visitor, there is a museum exhibiting various things about orangutans, food, genealogy, and the others. 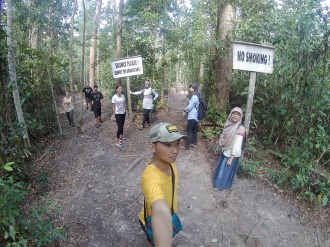 After that we walked again in approximately 500 meters, In the middle of the trip, we met a female orangutan and her two children, Mba nia said the name of orangutan ‘Uning’. But unfortunately, my pictures that photographed Uning uncertain fate because my HDD error and photos of my trip there in it. All of these photo from Mba Rina.

After a few minutes, we came to a place that similar with Pondok Tanggui area. The rangers were already put some fruits on the table. Some of the orangutans started to arrive and start eating. There orangutan that walk forward on the path that our passed earlier, orangutans were headed for the dining area. All the people gave way to the orangutan. Nobody touch it because it was forbidden. There are several orangutan behaviors that makes visitors laugh. It is very funny.

After you finish viewing the feeding time, we decided to go home because it was already late afternoon. On the wooden walkways, we met the ‘Siswi’ female orangutan that is very famous in the camp. It is old enough and benign as well as their partners ‘Tom’. Unfortunately, we did not meet up with Tom. After taking pictures near Siswi, then we met again with another wild orangutan near Kelotok. It seems that the wild orangutan, it can be seen from its movements. The orangutan other side of the river, it crossed the river and pass through those Kelotok.

We home at dusk. On the way, we saw a Sinyulong Crocodiles (Tomistoma Schlegeli). And it is enough to treat our curiosity about the crocodiles in the river. Because it was not the dry season it is difficult to see crocodiles.

While waiting for dinner and when we would see the beautiful fireflies, something happened to our Kelotok. Something that might make our heart rate to beat faster than usual. Thank God that everything is okay in the end. Although the dinner was so delicious instantly became bland to us.

Thanks to Tanjung Puting National Park for your orangutans, proboscis monkeys, monkeys, birds, Sinyulong Crocodiles, and all of your plants.

2 responses to “Tanjung Puting National Park, Love all of your Orangutans”