The first destinations we visited in Karimunjawa is a shark breeding on Menjangan Besar Island, Karimunjawa, Central Java. We set off from a dock on the island Karimunjawa with a ship. After about 10 or 15 minutes, we arrived at an island. We then got off the ship. Previously, we were asked by the manager of the place was on who would enter. Each incoming visitor must pay the entrance fee to the sharks breeding place.

There are two big enough pools in the area. In those ponds, there are a few little sharks.  Visitors may enter into the pond and take pictures with the sharks. But there are some rules that must be followed by visitors. There are five things that must be considered by visitors as abstracted from the pages of Kompas travel. Part of it was also informed by the officer at that place before the visitors went into pond. 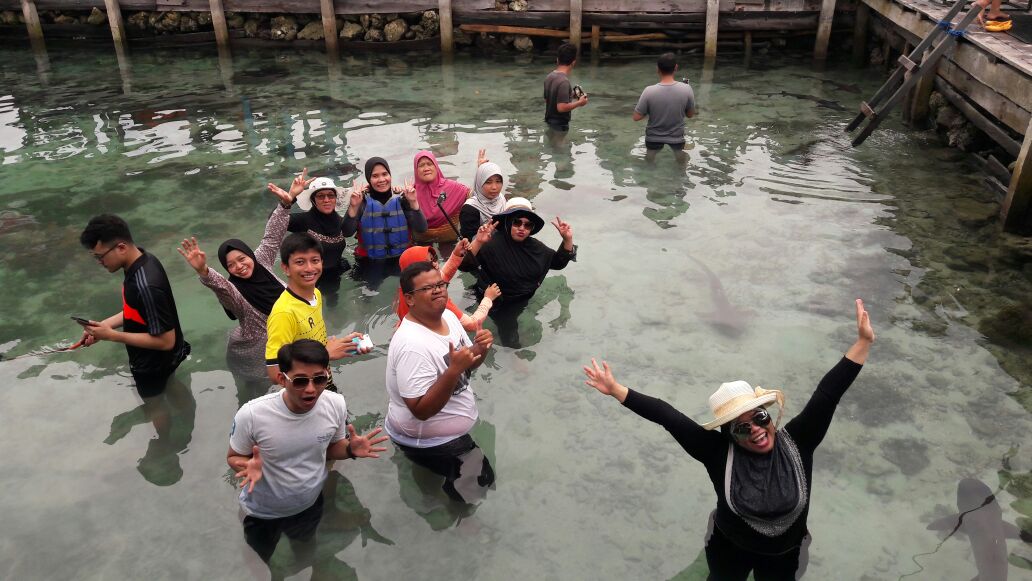 First blood in the body, such body parts injured or women who are menstruating. Second, the visitors must keep hands do not go into the water or doing excessive hand movements. It will lure the shark closer, sharks think that the visitors give them food. Third, do not hold the shark. Sharks would revolt to escape from the grip of visitors. Fourth, if you previously ate fish or hold fish. Try to wash your hands. The smell of fish could attract sharks. Fifth, visitors should always be in calm conditions. Do not be afraid of or worried about sharks synonymous with ferocity.

There is a cottage between the two ponds that can be used to sit and look at the movement of sharks in the pond. In addition, there are several other ponds in the area. For example, a small fish pond, pond other marine life; starfish, and so forth.

From the edge of the pond there is a small path that could use to go to Menjangan Besar Island. Unfortunately, we did not explore the island. So it does not really know what’s there. Maybe next time, hopefully.

11 responses to “Karimunjawa: Breeding of Shark on Menjangan Besar Island”